Russo Defends Texas Championship Against The Lion In Rematch ‘Im very aware of the Lions intentions, but that’s not going bother me. And in Del Rio Texas with the fans support, i’ll walk out of the ring as a winner’

AFTERMATH… The fans of Del Rio enjoyed a big night of professional wrestling as they were treated to 7 matches including not just one, but 2 title matches.

*Nightmare of Pain defeated 3 opponents in DJ Talamantez, Ashton Jacobs and Shige in a handicap match

Sunday December 18th Texas Wrestling Entertainment comes to Carrizo Springs Royal Palace. Bell Time 4pm, doors open at 3:30.
The Main Event features two of the top Texas independent wrestling stars in Rudy Russo and Texas Champion Moonshine Mantell.
This is for the Texas title and It will be Mantels first defense since winning it December 3rd in San Antonio.
But it will not be the first meeting with these two as they have had several matches against each other all over the state of Texas. One match in Del Rio Texas, a ‘Pinfalls Count Anywhere’ saw both combatants actually fight out in the street in front of the building. This match is a title match so expect the intensity to go up a few notches.
Another match to look for is between the Tag Team Champions the Renegades versus Nightmare of Pain.
Nightmare of Pain are two heavy hitters each weighing in at close to 400lbs. The Renegades, Bandana Joe and Coven, look to have their work cut out for them. Coven was quoted as saying ‘It doesn’t matter how big they are, they still put thier pants on one leg at a time. We’ll be ready for them’
Also, Max Castillano takes on the veteran Rudy Boy Gonzalez.
Castillano from McAllen, TX has high hopes of one day appearing in a WWE ring. He had a try out with the company in Orlando and was given high praise.
Gonzalez, who began his career in San Antonio in 1984, brings over 30yrs of experience into the ring. He has had battles with names from Guerreo to Danielson, and everyone in between. Even though he’s nearing the end of a long career, he’s said he won’t lay down for anyone.
Tony Tejano has traveled from Matamoros, Mexico to Memphis, Tn. He’s a rising star making his first appearance in Carrizo Springs.
Dressed to Kill, Scotty Santiago and Dylan Dunbar are former Texas Tag Team Champions and are looking at getting the titles back. In Carrizo Springs, they are in singles competition against Los Diablos #1 and #2.
The Gulf Coast Muscle Johnny Swole, DJ Talamantez and Aston Jacobs will be there also
Doors Open @ 3:pm, Bell Time 4pm
Come get autographs pictures and talk with all the stars.
Advance tickets on sale at Trinitys Restaurant $7 Adults, $5 Kids.
At the Door $10 Adults and $5 kids.

In early 2002 a group of Texas Wrestling Academy talent ventured to Philadelphia, Pa to take part in a new promotion called Ring of Honor. There were no promises, no guarantees made to anyone, just an offer of an opportunity of maybe possibly getting a chance to break into the very stacked and talented roster.
One opportunity that was offered was a match pitting a young Paul London vs a young Chris Marval. Both very talented and hungry individuals from Texas who spent their early years jumping from promotion to promotion before finally landing at the Texas Wrestling Academy.
Now they were at the biggest stage at that point in their career.
This match lasted less than 2 1/2 minutes as Chris Marval suffered a horrific injury, dislocating and breaking his ankle forcing the match to be stopped.
The stipulation of this match was, the winner would be offered a RoH contract.
Paul London has went on to not only star in RoH but was signed to TNA, WWE, and currently Lucha Underground. He’s held numerous singles and tag team titles thru out his career.
December 3rd Paul London vs Chris Marval will mark the first time both will face each other since that fateful day in early 2002.
A rematch, 14yrs in the making

The TWE Texas Championship originated in the Shawn Michaels Texas Wrestling Alliance promotion in 2000. Some of the biggest names in not only Texas, but the entire wrestling industry have held that title of Texas Champion.
The first holder of the title was Venon, who after a lengthy reign finally lost it in 2001 against former ECW star Justin Credible.
Credible was unable to meet the TWA schedule due to prior commitments and relinquished the title.
A tournament was held with WWE star Sho Funaki coming out as the new champion.
The title changed hands between Funaki and Shooter Shultz. Shultz was then signed to a developmental deal with WWE and departed from the area.
Funaki lost the belt in a fluke loss to Charles Poindexter Alexander.
He quickly regained it.
In what was originally scheduled as an NWA World title match vs Texas Champion Mike Foxx, World Champion AJ Styles still agreed to take the match after the local NWA promoter filed a protest since TWE was not part of the NWA.
Styles defeated Mike Foxx and held the title for 3 months before losing it back to Foxx.
Foxx faced opponents Hotstuff Hernandez, and Kazushi in a series of matches losing and regaining the title several times with each man.

Another Champion of note was American Dragon Bryan Danielson who had one title defense against The fallen Angel Chris Daniels.
Further down the road Cowboy James Clayton and Byron Wilcott battled all over Texas for the right to be called ‘Texas Champion’.

In 2013 the Championship belt was stolen from Wilcotts vehicle.
Over the last 5 months Ring of Honor star Keith Lee, Moonshine Mantell, Terrale Tempo and Rudy Russo have been positioning themselves thru a series of matches as to who would face each other for the new Texas Championship.
On December 3rd it comes down to the top two. 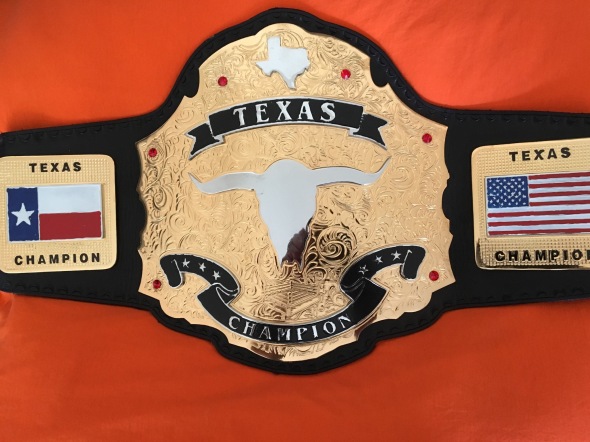 The team of Dylan Dunbar and Scott Santiago lost to the team of Thunder Kat and Mr 210 via ‘Disqualification’ when it was revealed Mr 210 was actually Dunbars tag team partner Donny Brooke, who pulled off his mask and unleashed a viscous attack on Thunder Kat.

In match for the #1 contendership for the TWE Texas Championship, Rudy Russo slipped by Terral Tempo.